“I don’t have time to do all of the work that is required to doodle in social media,”

“You’re just asking for too much money,” said Bill Poteet, of Poteet Properties, Inc. when I quoted him a price for developing his web presence and a marketing program of action for success.

Bill has been in the commercial real estate business for nearly 30 years, and added residential real estate about ten years ago as his wife Cheryl joined the firm.

They’ve been very successful, however, their website was in desperate need of an update.

In the past, their website has been more of a tool to provide information after the person had made contact with them.

The intention I’d mentioned was to take his web presence to a new level, where it would actually do outreach for him.

“I don’t have time to do all of the work that is required to doodle in social media,” Poteet went on to explain. I’d mentioned, you don’t have to do that much work, but the tools are essential to getting found, whether you use them or not. Plus, I’d mentioned, they all have to talk to each other to build the power of all of them, rather than each web platform standing on its own.

Rather than buy the whole marketing/content plan, he wanted to save money and do it one step at a time, and he said he would provide the content for the website. 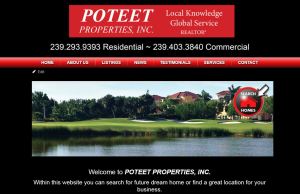 We took on the job as we have known him for years and explained how he’ll have this powerful marketing tool that will still need to be loaded in order to fire off rapid rounds of success generating revenue and interest. He still wanted to move slowly and deal with deficiencies his web presence would have, without a marketing plan. We agreed to move forward, and he agreed he would slowly get up to speed to make his web presence a true marketing outreach tool.

Since Google is the strongest search engine, and they own You Tube, we pointed out that he had to have a Google+ business page, You Tube channel attached, and should have a business profile on Facebook and LinkedIn, rather than a personal page. He had a Twitter account, so we could utilize some of what he had. We took the existing platforms and attached/linked them all together and set it up to feed the web platforms that were in existence and make them self-populate, as much as possible.

In addition, he wanted to have IDX listing feeds for displaying and searching for commercial and residential real estate.

I explained how one social media platform shouldn’t work all by itself, but by multiplying the power of one to the others, he’ll get exponential returns for the same buck.

To round out the outreach tools, we rebranded his email marketing templates so that he was sending a uniform message across all of his web tools.

Will he take the time to make it all work as promised? If you know him, stay on him. If not we’ll have more work to do to get him to generate the revenue he deserves from his new web playground.

Watch the video below for more insights

Want to join the discussion?
Feel free to contribute!